Our family of websites

Few people know the saga of Thunderball like Robert Sellers, author of The Battle for Bond.

Sellers extensively researched the back story behind the fourth James Bond film, which celebrates its golden anniversary in December. The author agreed to an e-mail interview.

Question: What’s the importance of Thunderball for the Bond films? It generated two films (one in the Eon series, one outside of it), legal controversy, etc. How has the entire Thunderball matter affected the 007 movies?

SELLERS: It’s fascinating isn’t it that events from well over 50 years ago are still causing ripples in the Bond universe today. We only have to look at the upcoming Spectre to see it. The name ‘Spectre’ originated during those Fleming/McClory script conferences of 1959.

The original idea for Thunderball was to have the Russians or the mafia as the baddies, but Fleming thought that was a bit corny and so came up with the brilliant idea of a private crime syndicate.

It turned out to be a most significant contribution, since Spectre became recurring foes in subsequent novels and the film series. However, when McClory won the film rights to Thunderball he owned the usage of them, which is why post Diamonds Are Forever Spectre and Blofeld never made another appearance (in the Eon series). Till now, of course, since the Bond producers purchased all rights in them from the late Kevin McClory’s estate in 2013.

Another interesting consequence of the McClory saga goes back to the late ’90s when the Irishman was working with Sony in an effort to make yet another rogue Bond film. More messy lawsuits followed with the inevitability of McClory losing.

One of the consequences of the settlement was the chance for Eon to get their hands on the one Fleming novel they never owned, Casino Royale, which Sony held due to its ownership of Columbia Pictures. Sony were only too happy to sell and Casino Royale was eventually released in 2006 and marked Daniel Craig’s debut as James Bond. So it’s strange how McClory sort of hung around like a bad smell and even in death, with the release of Spectre, his influence remains.

Kevin McClory is a very polarizing figure. Some fans blame him for Ian Fleming’s death at 56. Others say McClory was pursuing his rights. What is your view of McClory?

SELLERS: He was a shyster and thank God his Thunderball film never got off the ground, it would have sunk the franchise before it had a chance to get started.

The genius of Broccoli and Saltzman was in the team they assembled around them to make their films. It really was lightning in a bottle. The combined talents of Connery, Maibaum, Young, Adam, Barry and Ted Moore was what really made those early Bonds the classics they are. I don’t think McClory had the clout or foresight to pick a crew as good as that.

I do sympathise with those who blame McClory for Fleming’s untimely death. Fleming was already ill prior to the court case, having recently suffered a heart attack, so the pressure of it all couldn’t have done him much good. Fleming told his friend the poet William Plomer that he was winding himself up like, ‘a toy soldier for this blasted case with McClory. I dare say that a diet of TNT pills and gin will see me through, but it’s a bloody nuisance.’ The TNT pills were nitroglycerine, prescribed by his doctor to prevent another heart attack. Although during my researches I discovered that in the middle of the trial Fleming succumbed to two further heart attacks; one of the reasons why he was persuaded to throw in the towel.

However, one must not underestimate the importance of McClory, after all he was the first person to fully realize the potential of Bond as a screen character when Fleming had already been turned down by most of Hollywood. He also contributed lots of ideas to the project.

It was his idea for the story to have an underwater element to it, which was an off-shoot of a film project he’d been working on with Grapes of Wrath author John Steinbeck about treasure hunters in the Bahamas. Also in an early script draft Fleming had the villains dressed up as bogus soldiers with forged passes to steal an atomic bomb from a British rocket station, a scenario Jack Whittingham felt wasn’t credible, ‘even to a half wit.’ It was McClory’s idea that the theft of the bomb be carried out in the air, after reading a newspaper report about a Victor Valiant bomber that disappeared during a training flight. So he was very much part of the creative process.

What’s your view of how Ian Fleming handled the original Thunderball project (the one with McClory as producer)? Was he careless? Or something else?

SELLERS: I think an element of arrogance seeped into his thinking. Fleming was warned that plagiarising the Whittingham script could land him in court. His friend Ernest Cuneo, a former legal adviser to Franklin D. Roosevelt, saw only a judicial minefield were he to publish the Thunderball novel as his own work.

So why did he do it? Arrogance? Maybe he thought his establishment credentials (Eton, Sandhurst, Naval Intelligence) lent him superiority over the brash, Irish and working class McClory. Maybe he thought, well James Bond is my creation I can do what the hell I like with him. And I do have sympathy for that viewpoint. Whatever the reason, Fleming totally misjudged McClory — who came after him like an attack dog, and as we know the consequences were to be monumental.

You see, McClory had a traumatic experience when he was a young merchant seaman during the war. His ship was torpedoed and he drifted for days in freezing temperatures in a life boat with other survivors, many of whom didn’t last the 14 days before they reached land. This incident shaped McClory’s approach to life, he was determined never to let anything get the better of him again, this underpinned his decision not to let Fleming get away with his plagiarism and fuelled his subsequent battles with Broccoli.

Jack Whittingham sometimes gets forgotten with the original McClory-Fleming conflict and the later McClory-Eon Productions conflict. What’s your view of his contributions to the original Thunderball project?

SELLERS: Fleming’s attempts at writing a Bond script are lamentably bad, I’ve read them, they feel static, old fashioned and uninspiring. They are chock full of good ideas but the execution, unlike his fiction writing, is poor.

Fleming wasn’t a scriptwriter as he himself freely admitted in a letter: ‘The trouble about writing something specially for a film is that I haven’t got a single idea in my head.’ The experienced Whittingham was brought in to turn Fleming and McClory’s ideas into a workable and viable commodity that would interest backers or a studio.

And that’s exactly what he did, he made the whole thing come alive in a very visual way and made it very exciting. Take this brief section from the final shooting script which describes how Largo dispatches the corpse of a double-crossing minion: ‘Martelli’s body has been stripped. Blood still wells from the wound, and smears his body. They put it into the underwater compartment. Martelli’s body floats away from the hull of the yacht and down. Camera pans as two or three sharks move inquisitively towards it. We then see the surface of the sea bubbling from the thrashing bodies of the sharks.’ It’s very visceral and very Bond.

To a large extent Whittingham also changed the character of Bond himself from the one in the original novels to one that contemporary cinema audiences would find more palatable. In other words the Bond depicted in Whittingham’s script is closer to the one ultimately portrayed by Connery than it is to Fleming’s literary antecedent.

He was also prone to a few bonkers ideas, too. The shooting script of the original Thunderball, had it gone ahead, would have begun in the Oval office of the White House with former President Harry Truman seated at a desk warning the audiences of the nuclear peril. Bizarre! 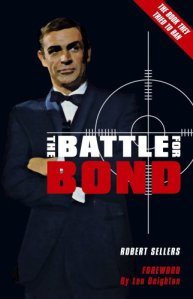 What was the biggest surprise for you as you researched The Battle for Bond?

SELLERS: The biggest — oh my God — moment was just as the book was going to the printers. My publisher had been contacted by someone who knew McClory and had a wealth of photographic material. I met this mystery individual at a cafe in Hampstead in London, all very cloak and dagger.

He’d brought with him all manner of documents and pictures but the holy grail was a set of colour pre-production art work for ‘Warhead’ the 1975 Bond film starring Sean Connery that never was. He also had some original Polaroid snaps of Connery location scouting in and around the Statue of Liberty, where the climax of the movie was going to take place. My jaw hit the floor. I’ve seen these photographs on the Internet since but they were first revealed in my book. That was a great moment and totally unexpected.

What’s your view of where the Bond films stand today in terms of their impact on popular culture?

SELLERS: I don’t think the Bond films have any impact or influence anymore, certainly not in the way they did in the ’60s when they reinvented the action genre; actually more or less invented it, really. I don’t think the movies today have that kind of cultural impact, indeed lately they do seem to have been following cinematic trends rather than being at the vanguard of them, as tough as that is for a franchise 50 years old, especially in the way they aped the Bourne films and the Christopher Nolan Batmans in doing a Bond reborn /reboot.

If the Bond filmmakers really want to do something radical and interesting, I’d remake all the original novels totally faithfully and in their original time period. These would work brilliantly as two or three part Sky Atlantic-type movies. All we need to do is find an actor who looks like Hoagy Carmichael.

What’s your own personal opinion of Thunderball and Never Say Never Again?

SELLERS: I love Thunderball, it’s my favourite Bond film. For me it retains the dark, edginess of Dr No and From Russia With Love, combined with the fun and campness of Goldfinger, while looking ahead to the all-out epicness of things like You Only Live Twice. It features Connery’s best performance as Bond, no argument, and one of Barry’s most atmospheric scores. Yes the underwater stuff is too long at times, but a lot of it is eye-popping stuff. The scene where the aqua-paratroops jump out of a plane over Miami and hit the surf, with Barry’s score on overdrive, is breathtaking, especially on the big screen.

Never Say Never Again works and is watchable purely because it’s got Connery in it but too many times it comes over as a really bad ’80s American TV movie. It just doesn’t have the same magic quality of an official entry. I think I recall a quote by director Irvin Kershner saying how he approached the film as if there had never been a Bond movie before and maybe that was the problem. It’s certainly a well crafted movie, technically top notch with a uniformly excellent cast, but it’s rather like getting an Aston Martin for Christmas only to discover someone’s stolen the engine.